Consistent Leadership: One Skill Baseball Umpires Practice and You Should Too

Believe it or not, in a previous life, I was formally trained as a professional baseball umpire. (Yep, that’s me — front row, center — way back in the day!)

I’ve umpired hundreds of baseball games. And I was pretty darn good, too! Good — but unfortunately — not great.

And I knew why. Pitches around the corners!

The fact is umpires will see two to three hundred pitches every game. 90 to 95% of them are no-brainers.

Pitches that a batter swings at? Those are obvious to everyone. Pitches down the middle? Piece of cake.

Pitches in the dirt or pitches up in the batter’s eyes? You could make those calls.

But pitches on or around the corners? Those 5 to 10% of the calls tend to separate simply good umpires from the great ones.

Unfortunately, I struggled with pitches around the corners, and that ate at me.

You see, my goal was not be just a good, average, or acceptable umpire. I wanted to be a great umpire! And I knew I needed help.

Jack was a well-respected umpire with many seasons to his credit. I tracked him down and he agreed to meet with me.

He listened patiently as I went on and on about positioning, timing, mechanics and the like. Finally, I reached the climax in my personal quest for umpiring clarity.

“Jack,” I almost pleaded, “please tell me once and for all, these corner pitches — are they balls or are they strikes?”

I remember Jack paused and smiled, before stating flatly, “It doesn’t matter.”

What! I couldn’t believe my ears! It doesn’t matter?! Had he not been paying attention to me? I had just bared my soul. I’m getting my butt chewed with great regularity out there. And somehow that doesn’t matter?! Well it matters to me!

But before I could articulate my building frustration, Jack added his final observation.

“Phil, it doesn’t really matter because of who you are.

“That pitch — ultimately, it’s whatever you say it is!”

Then he paused — I think for effect — before adding,

“Phil, what’s far more important than whether a pitch around the corner is a ball or a strike, is that you call that pitch the same way — all the time!

“Remember, when you’re consistently consistent, people will adapt and adjust their behavior to yours!”

Consistent leadership is a skill any leader can practice.

And there you have the takeaway for umpires and leaders of any stripe who want to great at what they do. Don’t worry about perfection. Perfection is a myth. Focus on being consistent. Consistent leadership is a skill any leader can and should practice.

In the course of your career — like any good umpire — you’re bound to make hundreds, thousands, even hundreds of thousands of independent decisions.

The majority of these will go unnoticed, unmentioned and probably unappreciated by almost everyone.

Why? Because good leaders are expected to make good, basic decisions — that’s our job.

But with great leaders — most people will accept decisions great leaders make — even questionable decisions or decisions with which they might personally disagree if that great leader has developed a commitment to consistent leadership. Day in and day out — regardless the situation — irrespective of those involved — in every circumstance encountered. 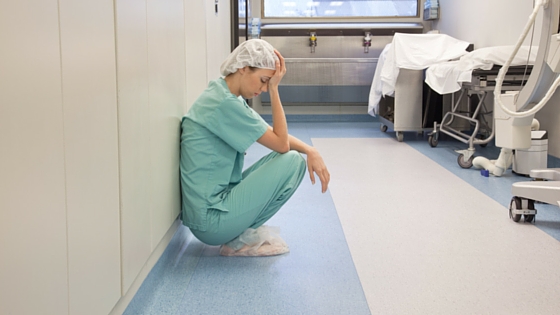 The Effects of Bad Work Processes

I had the opportunity to observe the effects of bad work processes up close last night.

Yesterday, the fabulous redhead and I got one of those calls you’d rather not get: a close family member was being taken to the emergency room in an ambulance.  Was it a heart attack?  Stroke?  We didn’t know.  We just knew we needed to be there.  So we threw some clothes in a bag and headed for Tennessee, arriving just after 11:00 PM.

What happened over the next eight hours was a study in frustration.

How To Lead When Things Go Wrong

How to Lead When Things Go Wrong

I’m sitting in the Atlanta airport, cooling my heels, while I wait for Delta Airlines to figure out how to get me home.  My partner Phillip Van Hooser and I have just come from a week on the road, working with Leaders Ought to Know client Helena Chemical. I was just trying to get home when one of those inevitable events happens that plague the life of a road warrior like me:  the flight was delayed for mechanical problems.  Apparently there is a little switch that is misbehaving, and maintenance is going to need some time to repair it.
I’ve come to accept these delays as a part of life on the road, but I was really impressed with the way the Captain of our crippled flight handled the situation.  Just as we teach in Leaders Ought To Know, I saw him demonstrating great leadership during our difficulties. It is easy to be a leader when things are going right.  The real test is how to lead when things go wrong, and Captain Steve Smith stepped up in a way that was a credit to himself and to Delta.

Posted by Martin Ramsay in Leadership

2016 Blizzard Taught Me Something about Focus

The big blizzard of 2016 taught me something about focus. The fabulous redhead and I live fairly far off the main road.  When it snows, even just a few inches, we’re likely to be snowed in until someone comes and plows us out.  Not that I mind, you understand.  I rather enjoy working, cozied up to the woodstove, when people assume I’m snowed in.

The blizzard of 2016 was big enough that we thought we’d better line up someone with a tractor to scrape our lane.  At some point we’d want to get out and mix with our fellow citizens.  Translation: we’d want to sit in front of the fireplace at Cracker Barrel and swap yarns with some of the locals.  So we called our friend Ricky. 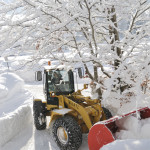 Ricky is a prince of a man, willing to help anyone in need.  Besides, he has the best toys; he brought his new backhoe over.  But Ricky managed to get his backhoe stuck!  And, in the process of trying to extract himself — using some tricky maneuvers with the bucket and the backhoe arm at the same time — Ricky managed to run one of the tires off of the rim.  It was a frustrating day for Ricky, and I really empathized.

As we were waiting for help to come, Ricky admitted what had happened.  He had gotten a call on his cell phone and had answered it, just as he was approaching a culvert.  He lost just enough focus so that he ran the backhoe into a deep ditch.  And that’s when the troubles really got started.

Posted by Martin Ramsay in Planning

When Your Mistakes Become Decisions 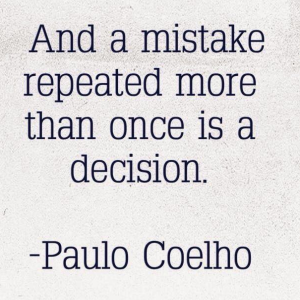 When do your mistakes become decisions? Does a mistake committed more than once become a decision?  In my last blog post I described how leaders who say they’re going to do something and then don’t do it lose their integrity.  Worse, they’re training their followers to ignore what they say, because they’ve shown they can’t be trusted to follow through.

David from Ohio let me know that he agreed with my assessment.  However, he asked, “You mentioned the word ‘mistake’ in your next to last paragraph.  Do you agree that a mistake committed more than once becomes a decision?”

Posted by Martin Ramsay in Leadership 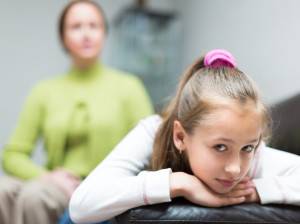 How I Compromised My Integrity in Leadership — I’m Not Going to Tell You Again!

Later, over coffee, my wife said, “I am growing to hate that phrase.”

How to be a Better Planner

How to Be a Better Planner

We went through the exercise in our office again recently. As a group, we sat down, put our heads together for several hours and sculpted our professional plans and activities for the coming months. It was a good exercise – unquestionably productive use of our time.

The exercise itself caused me to pause and think about other professionals I encounter who never seem to find the time (or the inclination) to plan their leadership strategy and activities.

Do You Know How to Minimize Risk?

How to Minimize Risk

What do you think about risk? Are you someone who secretly enjoys risk? Or do you play it safe?

I don’t think we can ever eliminate risk. But, when it comes to business processes, we certainly can and should take steps to minimize it. For how to minimize risk, read on.

Team Interviewing: Why It Results in Better Hires

During our recent Leaders Ought to Know webinar we briefly talked about team interviewing.  We didn’t have time to explore the concept in depth; perhaps we can do so in a future webinar. But let’s consider why team interviewing can be such a useful technique.

There are three major approaches to interviewing potential candidates:

Only the third approach is truly team-based. Why does this approach result in better hires?

Posted by Martin Ramsay in Front, Interviewing and Selection 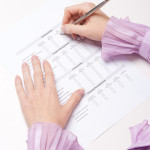 In our recent webinar on employee interviewing and selection I used a fancy word: rubric.  Sometimes fancy words just serve to confuse, but that isn’t the case here. Rubrics can be extremely useful in the hiring process. If you’re not familiar with using rubrics, read on.

The word rubric comes from the Latin word for “red ocher,” the color of red pigment used to highlight headings in medieval manuscripts.  That sense of the “red heading” evolved into a sense of the categories which those red headings described.  In the 1970s, academics further evolved the word rubric to include a way to measure or rate different categories of things that were important.  Thus the rubric became a tool for assessing a variety of categories, like the different elements that might be important when interviewing a job applicant.

Posted by Martin Ramsay in Front, Interviewing and Selection