Consistent Leadership: One Skill Baseball Umpires Practice and You Should Too 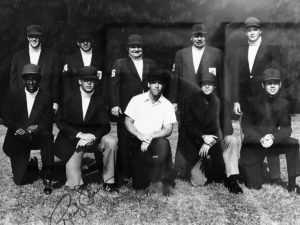 Believe it or not, in a previous life, I was formally trained as a professional baseball umpire. (Yep, that’s me — front row, center — way back in the day!)

I’ve umpired hundreds of baseball games. And I was pretty darn good, too! Good — but unfortunately — not great.

And I knew why. Pitches around the corners!

The fact is umpires will see two to three hundred pitches every game. 90 to 95% of them are no-brainers.

Pitches that a batter swings at? Those are obvious to everyone. Pitches down the middle? Piece of cake.

Pitches in the dirt or pitches up in the batter’s eyes? You could make those calls.

But pitches on or around the corners? Those 5 to 10% of the calls tend to separate simply good umpires from the great ones.

Unfortunately, I struggled with pitches around the corners, and that ate at me.

You see, my goal was not be just a good, average, or acceptable umpire. I wanted to be a great umpire! And I knew I needed help.

Jack was a well-respected umpire with many seasons to his credit. I tracked him down and he agreed to meet with me.

He listened patiently as I went on and on about positioning, timing, mechanics and the like. Finally, I reached the climax in my personal quest for umpiring clarity.

“Jack,” I almost pleaded, “please tell me once and for all, these corner pitches — are they balls or are they strikes?”

I remember Jack paused and smiled, before stating flatly, “It doesn’t matter.”

What! I couldn’t believe my ears! It doesn’t matter?! Had he not been paying attention to me? I had just bared my soul. I’m getting my butt chewed with great regularity out there. And somehow that doesn’t matter?! Well it matters to me!

But before I could articulate my building frustration, Jack added his final observation.

“Phil, it doesn’t really matter because of who you are.

“That pitch — ultimately, it’s whatever you say it is!”

Then he paused — I think for effect — before adding,

“Phil, what’s far more important than whether a pitch around the corner is a ball or a strike, is that you call that pitch the same way — all the time!

“Remember, when you’re consistently consistent, people will adapt and adjust their behavior to yours!”

Consistent leadership is a skill any leader can practice.

And there you have the takeaway for umpires and leaders of any stripe who want to great at what they do. Don’t worry about perfection. Perfection is a myth. Focus on being consistent. Consistent leadership is a skill any leader can and should practice.

In the course of your career — like any good umpire — you’re bound to make hundreds, thousands, even hundreds of thousands of independent decisions.

The majority of these will go unnoticed, unmentioned and probably unappreciated by almost everyone.

Why? Because good leaders are expected to make good, basic decisions — that’s our job.

But with great leaders — most people will accept decisions great leaders make — even questionable decisions or decisions with which they might personally disagree if that great leader has developed a commitment to consistent leadership. Day in and day out — regardless the situation — irrespective of those involved — in every circumstance encountered.

1 Responses to Consistent Leadership: One Skill Baseball Umpires Practice and You Should Too