One of my early career mentors called me this week.  I hadn’t heard from George, now retired, in over a year, so I feared something was amiss.  George was calling to tell me that a mutual colleague had passed away.

We were both saddened by the loss.  Sue was a larger-than-life consultant, a real dynamo who didn’t let a little thing like cancer keep her down.  Even though she was given only two months to live, she kept going for three years!

As people will do when receiving news like this, George and I started telling “Sue stories.”  “Remember that time at the Gary Tin Works when the union guy …”  “Remember when we met at the Dulles airport and had a quick meeting between flights …” “Remember staying up until midnight at Kinkos getting materials ready for the next day with the client …”

Are You Leaving a Legacy?

And those stories led to other stories, stories of influence, stories of impact, stories of … legacy. Sue left a legacy in my career, influencing particularly what I think 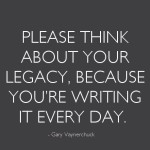 about consulting and how I view clients as colleagues.  Sue and George often said that it is important to give back, to share what you know.  In ways I’m only beginning to realize, that philosophy has resulted in my weekly video blog Notes From the Woodshed and in our Leaders Ought To Know® webinars.

As George and I talked, I realized that I am passing on to my younger colleagues some of the key principles of work and relationships that Sue and George and others like them instilled in me as a young consultant wannabe.

So hats off to Sue, to George, and to the many people who have left a legacy in me.  Hats off to all the legacy-leavers.  And may we all strive to leave our own legacy behind, not a legacy of stuff and things, but a legacy of lives empowered and work improved.

What Would You Say?

Speaking of a legacy of lives empowered and work improved, how have you been influenced by a legacy-leaver? What is the best legacy you’ve received from those who’ve gone before you? How are you passing that legacy on?